Disclaimer: This article contains lots of bad words. If you don’t want to read bad words, don’t click on an article about swearing.

I haven’t included racist or homophobic language. You should swear at someone because they are behaving badly, not because of how they were born.

Note: Don’t use these phrases in your job interviews and Cambridge exams. And be careful when using them on a first date.

So you are learning English. The language of Shakespeare. Of Dickens. Of Wordsworth and James Joyce. You love its beauty and majesty and you never tire of its power and precision. English sparks joy.

That’s when you want to swear.

When I’m teaching my classes I almost never swear. I try to be a ‘good model’ of English so that students can safely mimic me. But when the lesson is over – I start swearing like a sailor.

The cornerstone of all swearing.

Basically you can and should use it liberally before nouns and adjectives.

And before other swear words.

Synonyms: cock, prick, knob, tool (and a million others)

A dick is a penis. Obviously calling someone a penis has a negative meaning.

Why do you like Brian? He’s a total dick.

I mostly use it in the phrase ‘don’t be a dick’. It means ‘please behave with more class and dignity, like Anthony Hopkins in The Remains of the Day’.

The first time I told my girlfriend she was ‘being a dick’ she was NOT happy. But the next day she said, ‘you know what? I was being a dick. I’m truly, truly sorry.’

That’s how I remember it, anyway.

There’s shit in the sense of ‘this movie is shit‘, which means ‘really bad’. And there’s ‘a shit’ which is just like ‘a dick’ in part 2.

Note: If you want to get creative you can often add the suffix head to these curse words. ‘He’s a shithead’. ‘Trump is such a dickhead.’

But my favourite version is ‘little shit’, which is how I show affection to my cat. 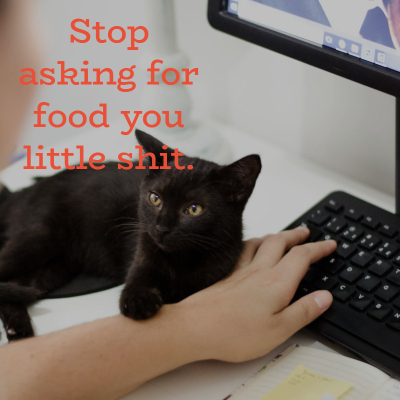 My cat has his own schedule, and he doesn’t give a shit what I am doing. He wants to go outside at 3AM and be let back in one microsecond before I fall back asleep. He’s extremely demanding and everything has to be done just how he likes it. Otherwise he wails his fucking head off, scratches at doors – whatever it takes. But you can’t stay mad at him. He’s adorable!

Guess what that little shit did? He waited until I got in the bath to start demanding his dinner! He does it on purpose!

Movies are shit, someone is a shit, and people talk shit. That means saying stupid or impossible things.

My favourite is to look someone in the eye and say ‘don’t talk shit’. The important thing is to put a space/pause between each word. Make it three sentences! 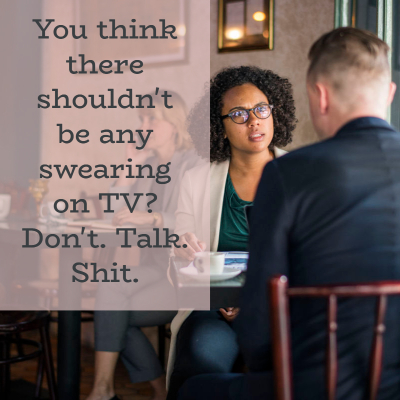 Most swearing is based on religion. But if God didn’t want us to swear, why did he make it so cool?

You can say ‘Jesus’ almost any time anything happens. Your cat vomits on your new socks? Jesus! Your neighbour has a new haircut that makes him look like a fucking serial killer? Jesus! You drop a knife and it nearly hits your toe? Jesus!

The best thing about the word ‘Jesus’ is that it’s so modular. Modular means you can easily add bits to it. So if you want extra emphasis you go:

But there’s more. One of the two great American inventions of the 20th century was stuffed crust pizza. The other was adding the letter H to Jesus’s name. 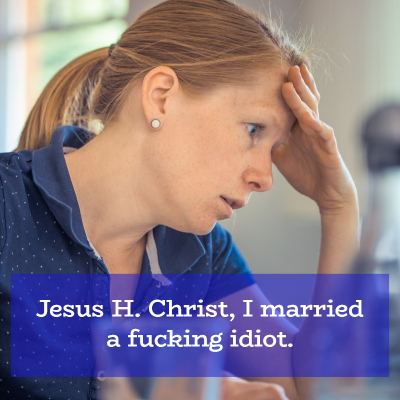 If you want to get really creative with this one, you can try this:

Christ on a bike!

We haven’t totally finished the Jesus theme. That’s because I feel ‘Jesus wept’ deserves its own entry.

‘Jesus wept’ is the shortest sentence in The Bible, and in the 1990s people started using it to express disappointment and/or annoyance. You have to put some negative energy into your voice as you say it.

Imagine your drunk boyfriend is trying to unlock the front door but he can’t get the key in the lock. You’re not angry enough to shout ‘stop dicking around!’ but you do want to say something. That’s where ‘Jesus wept’ comes in.

Or you’re watching your favourite football team and after 10 minutes they are 2-0 down and miss a penalty. You put your head in your hands and go ‘Jesus wept‘. 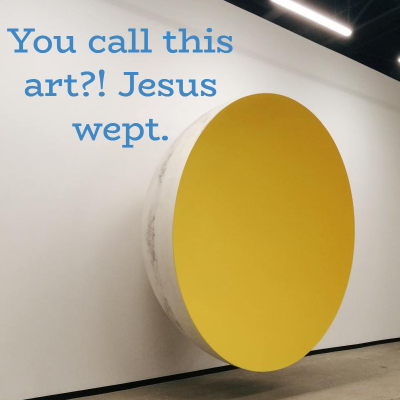 Because it’s a line from The Bible it’s much safer to use in public than those in section 5. If you say it in school and you get in trouble, you can say that you were just memorising scripture.

Take your basic ‘farmer English’ and add a hint of religious mysticism and you get ‘Holy Fuck’. It feels so smooth coming out of your mouth. Use it to express surprise and amazement. 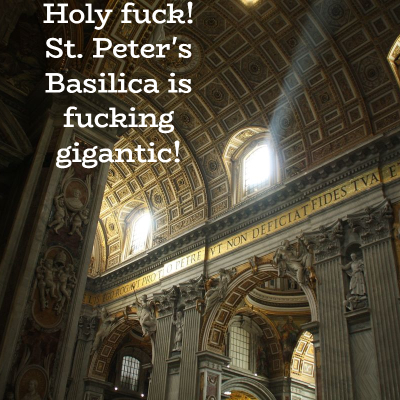 This one is pretty mild these days (although technically you’ll go to hell if you use it), but it remains deeply satisfying to say. Use it when you’re frustrated.

It’s another one with fun variations. 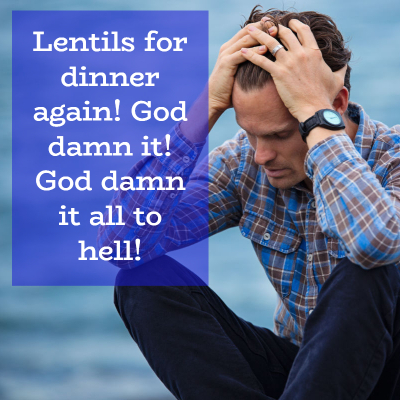 A fuckwit is an idiot. A moron. An imbecile.

But it’s got the word ‘fuck’ in it so it’s much stronger than all of those.

You have to WARM IT UP before you TURN IT ON you absolute FUCKWIT. 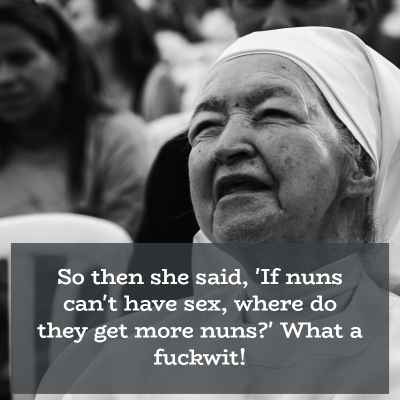 This is a very British way of saying ‘I’ve had enough of this’ or ‘I don’t want to continue’.

People often say ‘sod this’ or ‘sod that’.

As you know, ‘this‘ is used for things that are physically or emotionally close to you.

And ‘that‘ is used for things that are physically or emotionally DISTANT.

Who is the most famous writer in English?

You, a cat, are having a nice relaxing day. Suddenly, this happens.

What do you say?

1. Haha, what an entertaining prank. You got me.
2. Oh you little shit! Do that again and I will fucking murder you.

Come on, bro! Let your emotions out! Tell us how you really feel!

What did Karl (the guy on the right) say?

The other two sentences are 100% accurate (so if he said them, he wouldn't have been talking shit).

Pineapple is absolutely fucking disgusting. If I went on a date with Jennifer Lawrence and she ordered a Hawaiian pizza I would walk out.

Why is Eggsy so upset?

Nobody would ever react badly to watching Peppa Pig, and Eggsy's exam results were great because he prepared by taking online courses here at EFL Academy.

The correct answer is that he's watching Chernobyl. It's amazing, but holy fuck, it's hard to watch.

WTF – What the fuck? Multi-purpose. WTF were you doing in a hotel with our marriage counselor?

BS – Bullshit. Used when something is untrue. That’s BS! I never went to The Plaza Inn with Simon last night!

STFU – Shut the fuck up.

GTFO – Get the fuck out.

Fubar – Fucked up beyond all recognition. Used to describe a situation that has gone VERY wrong.

Arse – Means ‘bottom’. Arse is British English and ass is American. She has a face like a slapped arse.

Asshat – A moron. An idiot. Jack is, and always will be, a prize asshat. If you marry him I shall never speak to you again.

Bugger – Basically a much milder version of ‘fuck’. You want me to work on Saturday? Bugger that!

Cow – A rude name for a woman. Drive on the left you silly cow!

Git – Someone you don’t like. That Boris Johnson is a bit of a git, isn’t he? / Clean your room you lazy git!

Arsehole – A particular part of a bottom. It’s ruder than ‘arse’ because holes are generally rude.

Balls – Testicles. Generally used to mean something bad. We put him in charge of the Lisbon project and he totally ballsed it up. He doesn’t have the balls to make hard decisions.

Pissed – angry or drunk. I got pissed last night, and when I got home my wife was really pissed.

Bellend – Another way to say ‘dick’.

Pussy/Snatch/Twat/Minge/Beaver – Lady’s special area again. “When you’re a star you can just grab ’em by the pussy.” The 45th President of the USA.

Wanker – A man who pleasures himself sexually. The implication is that he’s a loser who can’t get a girlfriend.

Cunt – Lady bits. For some reason this version is considered much stronger than the other variants. Calling someone a cunt is a good way to start a fight.

Motherfucker – This one is still considered provocative even though it’s used 400 times in every Hollywood movie.

13 thoughts on “How to Swear Like a Sailor: The 10 Best English Curse Words”