One of my earliest memories of teaching English was a student complaining about a ‘had had’ sentence. “There’s nothing wrong with it,” I promised him. “It’s a totally normal English sentence.” “But it’s got two verbs in it!” he yelled. He was so angry about it! 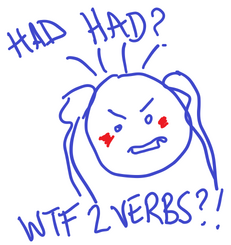 There are lots of English sentence constructions that students find bizarre that are totally normal. “I had had my dinner” is a-okay! In this article I’ll give you a quick explanation of how to use had had so you won’t be SHOCKED and ANGRY when you hear it on Netflix!

Before we can learn had had we need to quickly go over have had.

This is the present perfect tense and it’s used to talk about an action or event which began in the past and relates to the present or an event that happened at an unspecified time. (There’s more, of course, but we don’t have time to mention everything.)

‘I’ve eaten my dinner’ (present perfect) is pretty much the same as ‘I ate my dinner’ (simple past), isn’t it? Not quite. With the first one you might be emphasising that you are no longer hungry. That kind of subtle difference makes it hard to learn WHEN to use the present perfect but HOW to use it is pretty easy.

Most students have zero problem with the grammar of the present perfect when it’s have (the auxiliary) plus a different main verb.

But when you use have as the main verb their eyes bulge and they think the universe is collapsing in on them. But it’s exactly the same!

Note that in spoken English you should use contractions: I’ve had, he’s had, it’s had, they’ve had.

And contractions are not used in a question:

So we’ve talked about the present perfect, and now it’s time for the past perfect. It’s super easy – it’s just the past of the past. What? Now we are dealing with a past time and something before that.

Imagine I eat dinner at 7pm and then go and meet a friend at 8pm. My friend, Lance, who you can tell by his name is American, thought we were going to a restaurant so he is hungry.

Okay so that’s the present perfect, isn’t it? I have had dinner.

The next day I meet my friend Scarlett. I’m secretly in love with her but that doesn’t help you learn grammar so I won’t mention it.

Now I’m telling a story from yesterday, so it starts with the past tense: We went out.

So at 8pm Lance hadn’t eaten (this grammar tells us about the time before 8pm) while I had had dinner.

A Note About Contractions

‘d  can be short for would or had,

In these example sentence ‘d means had.

We’d gone by the time you arrived.

I’d had the idea in the first place.

Where had she gone? (she had disappeared)

Where had she had that drink before? (a new drink no-one had had before)

Before I started kite surfing, I had had no idea how difficult it was. (past perfect)

I have had ten lessons and I still can’t get up. (discuss learning and experiences – I probably plan to keep having lessons; the time isn’t over)

Before I moved to Spain, I had had a wonderful experience in America. (talking about an experience before something happened; Spain is the past, and America is the past of the past)

I have had a great time on the beach this summer. (experience; unfinished. It’s still the summer)

Note: the position of the adverb (recently, just, already, only, etc)

We’ve recently had problems with our llamas; they won’t eat anything. (You could put recently at the end, after llamas.)

I’d had a busy week and I just wanted them to eat their food. (=the only thing I wanted)

He’d already had a meeting with the guy.

She’d only had one quiet lawnmower, all the rest were noisy.

Which sentence is correct?

Explanation: I have had is correct – have is the first person form of the verb.

Explanation: made is correct  – the past perfect goes nicely with the past simple but not with a present tense!

Explanation: I’d had is correct – the past perfect is used to indicate something that happened, before something else happened.

Explanation: I’ve had is correct – use the present perfect to talk about something that started earlier and relates to now.

Explanation: She’s had is correct – the past participle of have is had.